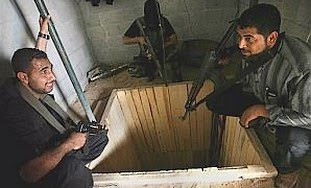 Israeli defense officials praised the Egyptian military on Monday for its increased efforts in recent weeks to curb the flow of arms to the Gaza Strip, but questioned the veracity of reports that the forces had seized several hundred shoulder-to-air missiles in recent days.
The seizures reportedly took place in the Sinai Peninsula, which is the main thoroughfare for smuggling to Hamas in the Gaza Strip. Most of the weaponry is transferred to Gaza via the network of hundreds of tunnels it has established along the border with Egypt – known as the Philadelphi Corridor – but a small amount also continues to arrive by sea.

In recent days, media reports have quoted Egyptian security officials claiming to have uncovered close to 10 different arms caches throughout the Sinai holding hundreds of kilograms of high-quality explosives, hundreds of anti-aircraft missiles as well as automatic rifles and ammunition.

Israeli defense sources said they were aware of Hamas efforts to obtain an anti-aircraft capability to impede the air force’s ability to fly freely over the Gaza Strip.

Due to the risk, Israeli aircraft already fly at higher altitudes and regularly release flares that can divert heat-seeking missiles.

Hamas is believed to already be in possession of a significant number of shoulder-to-air missiles, mainly SA-7s, an old Russian- made anti-aircraft missile.

If the reports are true, then the large number of missiles discovered by Egyptian security forces could indicate increased efforts by Hamas to bolster an anti-aircraft capability ahead of a future conflict with Israel.

Overall, Israeli officials confirmed that Egypt had recently increased its efforts to try to stop smuggling across the border. Earlier this year, Egypt began constructing a steel wall that it buried close to 20 meters underground along the 14- kilometer border, but the Palestinians, according to reports that have reached Israel, have succeeded in breaching the wall.