PA continues to promote the denial of Israel's existence 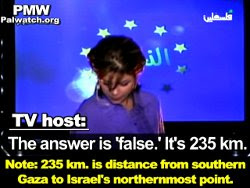 The Palestinian Authority TV's weekly game show between competing Palestinian universities continues to deny Israel's existence through the questions posed to the quiz contestants. Last week, three different questions and matching answers on The Stars all reflected a world view in which Israel does not exist.

PA TV is under the direct control of PA Chairman Mahmoud Abbas's office.

It should also be noted that PA TV displayed the EU logo as background throughout the quiz.

PA TV introduced The Stars TV program in November 2009. The first season was funded by the European Union and the quiz questions all related to Europe, covering such topics as history, geography, personalities, government, culture, arts, and sports. Each program featured competing representatives from two Palestinian Authority universities or colleges. The first competition ended in January 2010, and the last program showed a prize ceremony with the participation of Minister of Welfare Majda Al-Masri; Minister of Prisoners' Affairs Issa Karake; and director of the MAAN news agency, Nasser A-Lahham.

In May 2010, PA TV announced a new season of the program, which is being sponsored by the cell phone company Jawwal. Although the prominent use of the EU logo suggests that this season is also sponsored by the EU, Palestinian Media Watch has been unable to verify whether this is the case.