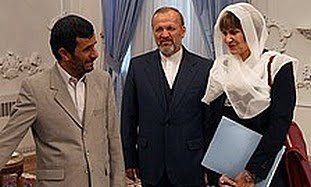 BERLIN- The nuclear devices provided to Iran for enriching uranium were not approved by the Swiss government, Inficon CEO Lukas Winkler told The Jerusalem Post on Wednesday, contradicting his earlier statement that the Swiss State Secretariat for Economic Affairs (SECO) issued a permit to deliver nuclear equipment. The role of the Swiss government in the delivery of the devices is attracting intense media attention in Switzerland.

On Sunday, the online edition of 20 Minuten headlined its story “Swiss help Ahmadinejad” and asserted that “the Swiss authorities were informed and undertook no action” to stop the delivery of nuclear pressure gauges to Iran.

Winkler backtracked and told the Post that “we do not need a permit,” and denied securing approval from SECO.

In an e-mail on Wednesday to the Post, Rita Baldegger, a spokeswoman for SECO, wrote, “Swiss export control authorities have knowledge about this case since June 2009...The goods were not subject to an export license. The exporter was not aware that those goods were destined for Iran. Otherwise an approval of the Swiss export control authorities would have been necessary. Switzerland would not grant any license for the export of such transducers to Iran.”

Asked in the Post's press query if the trade deal endangered the the security of the European Union and Israel, Baldegger, the SECO spokeswoman, declined to comment.

Shlomit Sufa, an Israeli diplomatic spokeswoman in Bern, told the Post on Wednesday that the Israeli Embassy in Bern wished to not comment on Switzerland's involvement in facilitating the delivery of the nuclear pressure gauges to Teheran. A spokeswoman for the Swiss Embassy in Tel-Aviv, Renate Schrenk, told the Postthat Ambassador Walter Haffner was “very informed” about the Swiss nuclear equipment deal with Iran, but would not issue a statement.

Critics charge the Swiss with lax export control regulations and an energetic pro-Iran trade policy that jeopardizes the international effort to compel the Islamic republic to suspend its nuclear enrichment program.

Nuclear proliferation experts deemed Iran's acquisition of the Swiss nuclear gauges as a crucial step toward Iran's quest to attain nuclear weapons capability. David Albright, an American nuclear weapons expert and president of the Institute for Science and International Security in Washington, D.C, told the Swiss paper SonntagsZeitung that the Swiss-Iran deal was a “ very important case and a disappointing defeat in the fight against Iran's atomic weapons program.”

Comment: Sanctions, what sanctions-follow the money! This is the same Calmy-Rey who came out in support of "Palestinians" regardless of the violence they used against civilians, and berated Israel without haste. Apparently, we see $28 billion reasons why she sold her soul.
Posted by GS Don Morris, Ph.D./Chana Givon at 7:44 AM