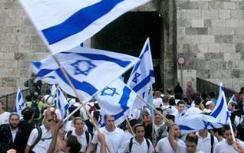 Deputy Foreign Minister Danny Ayalon addressed Diaspora Jews in honor of Israel's Independence Day and recalled the many sacrifices Jews made in order to create the State of Israel, as well as

This year we celebrate 62 years since the re-establishment of the State of Israel and 150 years since the birth of the Zionist visionary Theodore (Binyamin Ze'ev) Herzl. We can look around our nation and take enormous pride in what we have achieved in the short few decades since Jewish sovereignty returned to the land of our fathers. Herzl famously wrote "If you will it, it is no dream" over 100 years ago, but unfortunately he died only a few years later. His dream, a Jewish State, would, against all the odds, be recreated in its ancient land, as he prophetically stated, less than five decades later.

Today, most of us do not know a time without the State of Israel. Few alive remember the battles, the struggles and sacrifice that the early Zionists and even early Israelis had to endure to ensure that Herzl's vision would not remain a dream. Too many take the presence of Israel for granted and it has allowed us to become complacent about its role and its future. We must never forget that we are a reborn nation surrounded by many enemies intent on our destruction through various means.

When David Ben-Gurion read aloud the Declaration of Independence at the Tel Aviv Museum in 1948, the ink had barely dried before five Arab armies invaded our infant state to destroy us militarily. For many decades afterwards, Arab armies would attempt to destroy Israel on the conventional battlefield, but none were successful. Today, we can claim with pride that we have the strongest military in the region, and those hostile to us learnt that they can not defeat us this way.

Next, our enemies tried to defeat us economically. The Arab League initiated a boycott against our state when we were welcoming hundreds of thousands of our brothers and sisters from across the globe. They gave ultimatums to every company in the world, telling them that if they conduct business with the Jewish State, they will not be able to conduct business with any of the Arab states. This was extremely difficult for the new state, but fast forward today we have one of the strongest economies worldwide and we are about to join the OECD, the forum of the most powerful global economies.

After this too failed, our enemies began an unconventional and terrorist war against Israel. Israelis and Jews have been butchered in their thousands by extremists who chose their death over our life. Although no one can argue that the threat is 100 percent extinguished, we have once again managed to beat this scourge and today far fewer innocent people are being killed by terrorists, even though there are daily attempts.

Having failed on so many occasions and learning the lessons, our enemies have sought a new attempt to defeat us. This is through the current delegitimization campaign and so-called ‘Lawfare'. This may become our toughest battle yet. Our enemies know that they have distinct advantages over us that are difficult to contend with. They have an automatic majority in international institutions and have created a systematic and orchestrated system to tar the Jewish State as akin to the Nazis or the racist Apartheid regime. They prevent us from speaking on campuses, having our voice heard in forums and deny our freedom of speech because they know that if our voice is heard loud and clear then our enemies' flawed narrative will collapse.

Although few know it, or report on it, the Organization of Islamic Conference (OIC) clearly stated on a number of occasions that they initiated the Goldstone Commission. How many of those who scream about Israeli war crimes know that they are the mouthpiece of ugly autocratic oppressive regimes? How many of those who read about the attempted arrest of Israeli officials in Europe realize that these attempts are initiated, supported and funded by those in our region who will not allow a woman to vote and oppress their own people?
However, the verbal terrorism and attacks on our legitimacy will fail just as every other tactic before it. Nevertheless, to win this battle we must reinforce education and understanding of our history and purpose. We need to further the understanding of our historical, religious, moral and legal rights. Too few of our people understand that our modern legal national rights are not based on history, religion or the Holocaust, as important as each of these are, but because the international community came together in 1920 as rarely seen before and conferred national rights in Eretz Yisrael to the Jewish people.

Less than a week after we celebrate Israel's Independence Day, we will commemorate 90 years since the San Remo Conference. Few nations in the world can show such a determined and unified statement of intent for their national aspirations. When we add this to the corpus of international statements, resolutions and treaties, we will find that although we are perhaps the only member of the United Nations whose legitimacy is regularly questioned, few nations on earth have such modern legal instruments as the Jewish State to cement our legitimacy. We need to learn these facts and to teach them to others.

On this, Israel's Independence Day, many see the glass as half-empty. We have so many challenges and obstacles to overcome. However, we should remember our achievements. In a time when intellectual property will become the greatest resource of the 21st century, Israel stands at the forefront of innovation and technology. Israel's inventions and technological knowledge are making the deserts bloom in Africa, saving millions of lives through its medicinal innovations, creating alternative energies and securing the future of many people around the world.

We have continued Herzl's vision, even after our independence, and we are dreaming of bigger and better things to come. This is why we have a bright future, and with your help we can make it even brighter, not only for Israel, but also for all the people who are inspired, assisted and supported by Israel. We hope to see you here during Israel's 63rd year since our reestablishment and help celebrate the dream of the Zionist visionary that was born 150 years ago. (IsraelNationalNews.com)
Posted by GS Don Morris, Ph.D./Chana Givon at 1:09 PM