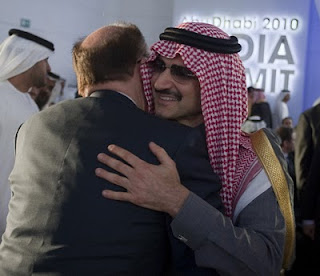 Former prominent guests on Fox News, including Walid Shoebat, contend that the News Corporation has surrendered its “fair and balanced” coverage of Islam and events in the Middle East for a fistful of Saudi cash. Their contention is based on a series of recent developments within the media giant.
The first development was the news that Rupert Murdoch, CEO of News Corporation, invested $70 million in the Rotana Group, an enterprise owned by Prince Alwaleed bin Talal, a nephew of Saudi King Abdullah. The Rotana Group operates a host of TV channels throughout the Middle East and is a leading producer of Arabic movies.
Next came Mr. Murdoch’s decision to make Abu Dhabi, the headquarters of the News Corporation’s global media operations in the Middle East.

On Monday, the Fox Business Network announced that it will dispatch a full-time correspondent to the Middle East in order to inform Americans of the unique business opportunities in such places as Syria, a country that provides shelter for Hamas, the Islamic Jihad, and Hezbollah and support the insurgents in Iraq.

In the wake of this announcement, Fox news commentators – including Glenn Beck, Charles Krauthammer, A.B. Stoddard and Bill Kristol – condemned Geert Wilders, a well-respected Dutch dignitary and critic of radical Islam, as a “fascist” and a “demagogue.”

Mr. Krauthammer said that Mr. Wilders, who is the leading candidate for Prime Minister in The Netherlands, doesn’t know the difference between Islam and Islamism, a distinction known only to Mr. Krauthammer.

While Mr. Beck labeled Mr. Wilders as a “fascist,” Ms. Stoddard expressed her agreement with Krauthammer and added that “if people like this (Mr. Wilders) are elected to lead Holland it will suffer the consequences.

What caused this denunciation?

Mr. Wilders produced a short documentary on Islam in Holland called Fitna in which he argued that “there is no such thing as ‘moderate Islam’” and that the Prophet Muhammad would “. . . in these days be hunted down as a terrorist.”

In the past, the former member of the Dutch National Parliament was a frequent guest on Fox News. Last February, Bill O’Reilly welcomed Mr. Wilders to America, while condemning a scared Britain for banning him entrance to the country.

Other news about the parent company of Fox News began to surface, including reports that Kingdom Holding owns at least 7 percent of the News Corporation and has become the second largest shareholder in the Murdoch conglomerate. Some speculate that the actual shares controlled by Kingdom Holding through a hedge fund may exceed 25 percent.

As for charity, he gives millions to Hamas and other pro-Palestinian organizations.
Critics say that Prince Talal’s sizeable investment in the News Corporation accounts for Fox News programs critical of Israel, including a series of special reports in which Carl Cameron and Brit Hume alleged that Israel gathered information about the attacks of 9/11 and failed to warn the American people.

Walid Shoebat, a former member of the Palestine Liberation Organization, who converted to Christianity, charges that Fox New now prohibits critics of Islam and Islamic terror from appearing on its broadcasts.

"He himself (Prince bin Talal) said, 'I just had to make a phone call to [tell them to] stop using the word Muslim' regarding the rioting in France," Mr. Shoebat notes. "Bill O'Reilly says to Ibrahim Hooper, the head of the Council on American-Islamic Relations (CAIR), that he is an upstanding citizen. Since when was the head of CAIR an upstanding citizen?"

Mr. Shoebat adds that viewers will no longer be seeing any so-called "Islamophobes" on Fox.

"Today, I'm not invited at Fox News. Neither is Robert Spencer or Brigitte Gabriel," he laments. "But Ibrahim Hooper is invited to speak at Fox News. It used to be that experts on terrorism who are critical of the Islamic views [were] able to get a voice on Fox News. Those days are gone."

Mr. Shoebat says that instead of airing those critical views of Islam, Fox News now legitimizes Hooper, the spokesman for CAIR, a group which he maintains is a front for Islamic terrorists.

FamilySecurityMatters.org Contributing Editor Paul L. Williams is the author of The Day of Islam: The Annihilation of America and the Western World, The Al Qaeda Connection, and other best-selling books. He is a frequent guest on such national news networks as ABC News, CBS News, Fox News, MSNBC, and NPR. Visit his website at http://thelastcrusade.org.
Posted by GS Don Morris, Ph.D./Chana Givon at 2:50 PM