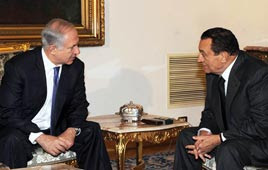 Prime Minister Benjamin Netanyahu has proposed an Egyptian-hosted summit with Palestinian President Mahmoud Abbas as a possible way to resume stalled peace talks, Israeli officials said on Thursday. The offer was the latest sign that progress was being made towards renewing US-backed negotiations frozen for a year.


Palestinian and Egyptian officials had no immediate comment on the plan, which two Israeli officials said Netanyahu raised on Tuesday at talks in Cairo with Egypt's President Hosni Mubarak.


Abbas was due to meet Mubarak next week and US President Barack Obama's Middle East envoy George Mitchell is expected in the region in early 2010 for a new push to resume peace talks.


"Israel's idea of an Egypt-hosted peace summit with Abbas was proposed during Netanyahu's talks with Mubarak," an Israeli official told Reuters. Another official confirmed Netanyahu had raised the summit idea. Netanyahu's office would not comment. On Wednesday, a spokesman, Mark Regev, said Israel hopes to "indeed see the resumption of talks with the Palestinians in the near future."


Nabil Abu Rdainah, an aide to Abbas, said the region "will see important political activity in the next two weeks."


Egypt's Foreign Minister Ahmed Abould Gheit was quoted by Palestinian newspapers as saying that judging from comments he made during his Cairo visit Netanyahu "is moving forward."


Netanyahu, a right-wing leader who took office in March, has repeatedly said he was ready to resume talks with Abbas, stalled since a three-week Gaza war launched last December and a subsequent Israeli election, without any conditions.


Abbas has insisted Israel freeze Jewish settlement building before the talks for a Palestinian state in territory Israel captured in a 1967 war may resume, and has rejected a temporary halt to construction ordered by Netanyahu as insufficient.


But in remarks marking the anniversary of his Fatah movement on Thursday, Abbas made just a passing reference to the settlements, and seemed to leave the door open to renewed talks.


"We are with the peace process," he said in a speech in the West Bank city of Ramallah. "Our hand will remain outstretched to peace, a just peace that ends the Israeli occupation".


Abbas also urged Israel to adopt an Arab peace plan that calls for a complete withdrawal from the West Bank in exchange for normalized ties with the Arab world.


Israeli media, quoting Palestinian and US diplomatic sources, reported Netanyahu was ready to negotiate a withdrawal to the 1967 borders as part of a land swap with Palestinians so Israel could keep some settlement blocs.


Israeli officials could not say when an Egypt-based summit may take place.


Michael Oren, Israel's ambassador to Washington, told Reuters that Mubarak had a key role to play in resuming talks.


"I know that Egypt is a country of immense prestige in the Arab world, and influence, and when Egypt throws that prestige and influence behind a certain process, that has an impact." Oren said. "There's a sense of some forward movement" in Middle East talks, he added.
Posted by GS Don Morris, Ph.D./Chana Givon at 7:54 AM