Clinton: Settlement freeze not a pre-condition for talks 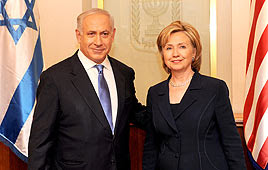 In press conference with PM Netanyahu, US secretary of state makes it clear that construction freeze in settlements not a precondition for negotiations with PA; earlier, Lieberman tells Clinton Palestinians don't want talks

A halt on settlement construction in the West Bank is not a pre-condition for the resumption of talks between Israel and the Palestinians, US Secretary of State Hillary Clinton said Saturday There has never been a pre-condition. It's always been an issue within the negotiations," Clinton said about the settlements.

Speaking at a joint press conference ahead of her meeting with Prime Minister Benjamin Netanyahu, Clinton said that she was eager to see the sides embarking on talks, but added that a settlement freeze was not a pre-condition for negotiations.

"I want to see both sides as soon as possible begin in negotiations," said Clinton. "Both president Obama and I are committed to a comprehensive peace agreement."

"I think where we are right now is to try to get into negotiations. The prime minister will be able to present his government's proposal about what they are doing regarding settlements, which I think when fully explained will be seen as being not only unprecedented, but in response to many of the concerns that have been expressed," she said.

Meanwhile, PM Netanyahu said that Israel is interested in progressing on the peace front vis-à-vis the Palestinians, and also in respect to regional peace.

Israel is willing to embark on peace talks immediately, he said.

Nabil Abu Rdainah, spokesman for Palestinian President Mahmoud Abbas, said: "A settlement freeze and acknowledging the terms of reference is the only way towards peace negotiations."

He added: "Settlement is illegitimate and it is not possible to accept any justification for the continuation of the settlement activity or to defend it in the lands occupied in 1967, including Jerusalem."

The Palestinian Authority is aiming to prevent negotiations with Israel, Foreign Minister Avigdor Lieberman charged earlier Saturday in his meeting with Clinton.


Lieberman especially criticized the Palestinians for presenting pre-conditions for the resumption of talks, noting that the PA did not make such stipulations in their dealings with the Olmert, Barak, and Sharon governments in recent years.


The foreign minister also told Clinton that he recommended, in a talk with Netanyahu, not to embark on negotiations with the Palestinians as long as they continue their incitement over the Goldstone Report and insist on bringing the matter up with the International Court of Justice at The Hague.

Earlier in the day, the top State Department official met with Palestinian leader Mahmoud Abbas. The Palestinians, however, rejected her request to resume talks with the Jewish State based on understandings reached between the US and Israel.