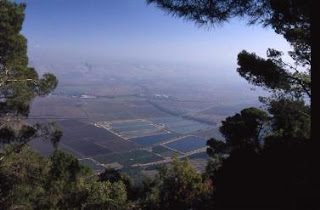 Want to see a sensational archaeological find in the middle of one of the most beautiful places in Israel? Make the trip to Israel’s northeast corner where the Jordan River spills into the always lush Hula Valley, the foot of majestic and sometimes snow-capped Mount Hermon. Tel Dan is a favorite place to take visitors and to marvel at. Why do so many people love this place? Tel Dan gets embraces archaeology, nature, and Biblical history in one sweep.

Known as Laish to its original Canaanite inhabitants, the area was conquered by the tribe of Dan (Judges: 18) when they sought a safer place to live in the wake of recurring Philistine attacks in their original tribal portion near Beit Shemesh. The place was perfect, as beautiful and bountiful as it is today.

When Lot, Abraham’s nephew was captured by the four kings of the north, Abraham led an expedition to free him (Genesis 14:14). The city gates of Dan from Abraham’s time have since been uncovered by archaeologists -- imagine! You can sit in the very gate that Abraham sat. This is more than just where the Bible comes alive. You can also view inscriptions with the words, “House of David, King of Israel.”

Apparently this was part of a boast made by Hazael, King of Aram in which he falsely claimed to defeat the Jewish forces that stemmed from the Davidic dynasty.

When Yirovam ben Navat broke away from the kingdom of Rechavam, son of Solomon, he took 10 of the12 tribes with him to prevent the kingdom from reuniting. To distract the people from the lawful king and from the symbol of unity -- the Temple in Jerusalem -- he established pagan worship in the form of golden calves (Kings I 1: 28) and erected them at the borders of his kingdom, one in Beit El on the southern border with Judah (Judea) on the way to Jerusalem, and the other at the northern border, Dan.

You will be able to see the actual altar of Yiravam ben Navat. It’s as if you’re viewing the actual drama unfold from the Book of Kings.

Tel Dan didn’t seem to lose any of its original beauty and vitality during the long exile of the Jewish People and absence from their land. It didn’t become a wasteland under the thumb of brutal conquests and neglect as much of Israel did. The waters of Mount Hermon have not ceased rushing through her streams from time immemorial. The majestic streams have maintained its youthful beauty.

In 1939, Tel Dan was established, despite the fact that its creation was against British law. The British occupying administration at the time had issued the infamous “White Paper” severely curtailing Jewish immigration to Israel, just as the Jews were fleeing Hitler’s grasp. The British placed a “settlement freeze” on the Jews, one that was ignored by young idealistic pioneers, who resisted the draconian anti-Jewish decrees to establish new Jewish villages throughout the land.

During the 1948 War of Independence when Arabs attacked from the Golan, the Dan kibbutz evacuated women and children and stood fast against the Syrians that advanced towards them from Syria’s high vantage point. The Jewish residents lived for 19 years under the shadow of the Syrian guns.

In 1967, all that changed. With the Syrians swept from the Golan, Kibbutz Dan could breath easy and enjoy the exquisite beauty of their home.

When visiting the nature reserve today, one can enjoy the calming effects of the sounds of rushing water, the chirping of exotic birds and the sights and smells of a collage of ferns, plants and trees. At the crossroads of three continents and sitting on the great Syrian-African rift, Tel Dan hosts a wide variety of species within its 120 acres.

Shalom Pollack is a veteran Israel tour guide, who guides and plans tours for families and groups. He also writes and lectures on Israel and will be on a lecture tour in the U.S. in October-November
Posted by GS Don Morris, Ph.D./Chana Givon at 5:22 PM