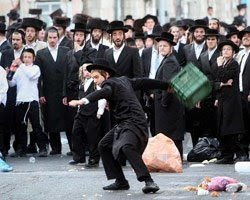 The intense political and economic challenges confronting us divert attention from a festering kulturkampf within the religious arena the outcome of which will impact heavily on the future of Israeli society. Orthodox Jews were never a monolithic group. Over the past century major divisions separated Zionists and anti-Zionists; those favoring stringent applications of Halacha versus those seeking more liberal interpretations; those rejecting secular studies beyond religious learning versus those seeking to synthesize learning Torah with worldly knowledge.

Current trends display a strengthening in the power of the non-Zionist and more extreme religious elements. This is reflected in the extraordinary growth of the haredi school network with almost 25 percent of Jewish first graders currently estimated to be enrolled in the haredi Ashkenazi or Sephardi educational streams. If the high haredi birthrate (a major asset in maintaining Jewish demographic levels) is sustained, the proportion of haredi schoolchildren in the general population will further increase.

In most developed countries, haredim are not exempt from mandatory government requirements that all children receive a minimal secular education. However here, to obtain haredi political support, the Olmert government agreed to extend state funding to the haredi educational network while simultaneously granting it complete autonomy from the government educational network, thus effectively legitimizing the exclusion of core secular curriculum subjects. The current government has also been pressured into providing additional funds exclusively to the independent haredi school system.

The social, economic and political repercussions of these developments will impact over the next few decades. In an approach without precedent in Jewish tradition, most haredi schoolchildren are being encouraged to disdain the virtues of earning a livelihood. One of our great sages, Maimonides (who would doubtlessly be disqualified from teaching in a typical haredi school because of his secular education) wrote in Mishna Torah, "Whoever thinks he can study Torah and not work, and relies on charity, profanes God's name."

In addition, during these difficult times, graduates from haredi schools obliged to seek employment are discovering that having been denied a secular education and lacking professional skills, they are doomed to a life of poverty and reliance on welfare.

An additional offshoot of this system is an accelerating increase in haredi youngsters evading the draft. It is surely bizarre for religious Zionists to be proportionately overrepresented in IDF combat units, willing to fight and die for their country, while their haredi counterparts, without any genuine halachic justification, as evidenced by the tiny but admirable haredi IDF unit, are directed by their rabbis to shirk their national obligations.

THE HAREDI HIJACKING of state rabbinical instrumentalities and courts is also having major negative social repercussions. A substantial proportion of the newly appointed haredi rabbis, chosen on the basis of cronyism, are utterly unsuited for their roles. Many are also unreconstructed anti-Zionists, refusing to recognize the flag, the national anthem, Independence Day and other obligations of living in a Jewish state.

Even the Chief Rabbinate, once the bastion of religious Zionism, has been transformed into an haredi fiefdom, despite undisguised haredi contempt for the institution. Ashkenazi Chief Rabbi Yona Metzger is universally regarded as a mere puppet of the zealots.

The displacement of Zionist rabbis by extremists paves the way for further problems, such as efforts to undermine the heter mechira (sale of land) introduced nearly a century ago by chief rabbi Abraham Isaac Kook to enable farmers to maintain their produce and livelihood during the shmita year.

The most disastrous impact of the haredi dominated rabbinical courts applies to conversion, where fanatical zealots like Rabbi Avraham Sherman are striving to impose unprecedentedly extreme and cruel halachic interpretations.

Sherman went so far as to retroactively annul conversions on grounds of alleged laxity in ritual observance. More outrageously, he accused highly venerated Zionist Rabbi Haim Druckman of expediting fraudulent conversions. He proclaimed that over the past 15 years, thousands of conversions approved by the government Conversion Authority headed by Druckman must be considered invalid unless endorsed by one of his haredi rabbis. Metzger, whose own beit din had supervised these conversions, created a furor after endorsing Sherman's approach and was even called upon to resign.

Every individual is entitled to impose upon himself the most rigorous application of Halacha. Besides there are many positive aspects to the haredi lifestyle that Israelis could emulate to their advantage and a constructive haredi presence should be an important element in the tapestry of Israeli life.

But when zealots leverage their political positions to intrude on personal lives or impose extreme standards on the entire nation, it only serves to alienate people from religion. Even Israelis who support the strengthening of Jewish values within the framework of the state, are angered and frustrated when haredi political zealots leverage their positions to extort sectional concessions which frequently conflict with the national interest.

There are enlightened Orthodox groups sensitive to these tensions which endeavor to promote religious precepts in a nonconfrontational manner. They also encourage a review of Halacha, which has evolved over thousands of years of exile, to relate to the needs of a modern democratic Jewish state. They include organizations like Eretz Hemda, Beit Morasha, Tzohar, Bar-Ilan University and many others who cultivate the shvil hazahav, Maimonides's designated golden path of moderation and tolerance.

THERE IS a need for religious Zionist rabbis and laymen to become more assertive. Religious Zionist parliamentarians scattered among Knesset political parties should insist that state funds for religious functionaries serving in rabbinical courts be channeled toward Zionist rabbis who send their children to the army, embrace modernity and can communicate with university-educated youngsters. While endeavoring to strengthen the Jewish character of the state, they must act on behalf of the nation as a whole and demand an end to shady deals with haredi parties promoting narrow sectional interests. The neutralization of haredi power to extort or veto reform is an additional reason why Kadima should act in the national interest and join the government.

There are ticking time bombs waiting to explode. The aggressiveness of extremist groups, like the Eda Haredit in Jerusalem, which over the past weeks threatened "to set the country on fire" if a proposed Jerusalem parking lot remained open on Shabbat, must be dealt with firmly or the anti-Zionist zealots will achieve a new lease of life.

The time to confront burning issues such as the haredi school system, military service, conversions and Shabbat legislation is now.