Muslims want Obama to throw Israel to the wolves 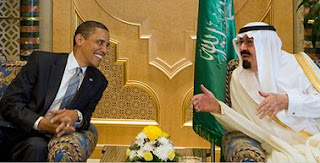 They say they have already made enough concessions to Israel. What were those, again? "As Obama Begins Trip, Arabs Want Israeli Gesture," by Jeff Zeleny and Michael Slackman for the New York Times, June 3 (thanks to James): RIYADH, Saudi Arabia — President Obama arrived here on Wednesday afternoon, opening a five-day trip to try to improve relations between the United States and the Muslim world and push for progress in settling the Arab-Israeli conflict. [...]

On his Middle East tour, Mr. Obama is expected to press the Arab nations to offer a gesture to the Israelis to entice them to accelerate the peace process.

But in his meetings with the Saudi king, he should be prepared for a polite but firm refusal, Saudi officials and political experts say. The Arab countries, they say, believe they have already made their best offer and that it is now up to Israel to make a gesture, perhaps by dismantling settlements in the West Bank or committing to a two-state solution.

“What do you expect the Arabs to give without getting anything in advance, if Israel is still hesitating to accept the idea of two states in itself?” said Mohammad Abdullah al-Zulfa, a historian and member of the Saudi Shura Council, which serves as an advisory panel in place of a parliament.

Al-Zulfa was, of course, silent about the non-acceptance of the two-state "solution" on the Palestinian side, and the continued commitment of Palestinian groups to the total destruction of Israel -- a goal that will be greatly advanced by that very same two state "solution." That is why the promise of recognition rings hollow:

While not dismissing the possibility of some movement on the peace process, the Saudis say the Arab world made substantial concessions in the Arab Peace Initiative, which was endorsed by a 22-nation coalition during an Arab League summit in Beirut, Lebanon, in 2002. That proposal offered full recognition of Israel in exchange for Israel’s withdrawing to its 1967 borders and agreeing to a “just settlement” to the issue of the Palestinian refugees....

“I think we should hear something positive from President Obama,” said Ahmed Kattaan, the Saudi ambassador to the Arab League. “I think he is going in the right way now.”

You have every reason to think that.
Thanks Jihad Watch
Posted by GS Don Morris, Ph.D./Chana Givon at 7:28 AM