The Internet and terrorism 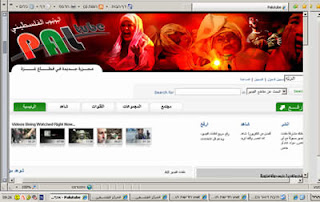 Hamas has recently launched PaluTube, its new file sharing website. AqsaTube, the previous file sharing website, has changed its name and appearance and is now known as TubeZik. Those changes resulted from the refusal of French and Russian Internet service providers to continue hosting AqsaTube.

Hamas has recently launched a new website called PaluTube . Also launched was a website called TubeZik , being a new version of AqsaTube. The file sharing website AqsaTube was taken offline twice after a French company and a Russian company stopped providing it with technical services.

Hamas has recently launched a new website called PaluTube . Also launched was a website called TubeZik , being a new version of AqsaTube. The file sharing website AqsaTube was taken offline twice after a French company and a Russian company stopped providing it with technical services.
2. PaluTube and TubeZik are file sharing websites, such as YouTube, in which users can upload video clips. The clips featured on the websites include incitement against Israel , preaching terrorism, and glorification of Hamas and terrorism. Also found on the websites are posters and clips pertaining mostly to Operation Cast Lead, portrayed as a “holocaust”. As is the case with Hamas's other websites, the information published complies with the radical ideology and the terrorist policy of the Hamas movement. Those websites are yet another constituent in the extensive Internet infrastructure of Hamas, which kept developing its websites during Operation Cast Lead and still does so.

IP address: 213.167.40.131. According to our information, that IP address is used by another five websites, including 4gaza.info (Gaza-based news website), al-fateh.net (the Hamas online children's newspaper), fm-m.com (the website of Filastin al-Muslimah, a Hamas organ distributed from Britain ) and yet three other websites whose identity is unknown.

Private Registration Services: DomainsByProxy.com, 1based in Arizona , US.

4. The T ubeZik website is actually the successor of Hamas's Aqsa Tube website, which was taken offline twice. At first glance it may seem like an innocent entertainment website which includes music and videos; however, it constantly shows an incitement video, also featuring archive footage about the leaders of Hamas and movies which encourage terrorism.

Internet Access Provider: OVH, a company from Spain (the French office of OVH formerly provided Internet services to Aqsa tube; however, it stopped doing so after the affair was exposed by the Intelligence and Terrorism Information Center and following appeals from the media).

6. Aqsa Tube, which was similar in name and design to the popular American website YouTube, was first launched in early October 2008. It was serviced by OVH, a French-based company. 3 Following a publication of the Intelligence and Terrorism Information Center , several journalists addressed the company and asked for its comment. After it was approached by a BBC News reporter, the company said that it took the website offline as of October 15, 2008. Hamas then issued an official announcement (from Gaza ) titled: “Aqsa Tube taken offline as a result of Zionist-American pressure”. At the end of the announcement, Hamas expressed its commitment to reopen the website. 4

7. About a week after the announcement was issued, Aqsa Tube went online again, this time with the assistance of a Russian ISP called RU network. In the new version, the website's logo was remodeled to be less similar to the original YouTube logo. When approached about the subject, the Russian authorities ordered the company to take the website offline, saying it included radical themes which do not comply with Russian laws. Access to the website was subsequently denied.

8. In mid-January 2009, a new website called TubeZik went online under the same address. The website can also be reached through Palestine-info, Hamas's major web portal. This means that there are currently at least two active Hamas file sharing websites on the Internet , even though their design is different from Aqsa Tube.

9. In some cases, the public exposure of the fact that ISPs across the globe provide technical services to the websites of a terrorist organization had the desired effect. When they were addressed, some companies stopped providing technical assistance to those websites following the exposure. It is an ongoing battle where persistence is necessary. It is not a lost cause, however, since occasional tactical achievement are possible, thus making it difficult for terrorist organizations to run their web-based campaign of incitement.

1 Owned by Go Daddy, it is a company which provides paid privacy and anonymity services for website owners by registering the website with the company instead of using the website owner's name (anonymity which Hamas is interested in). The company registers the website under its own name on Whois sites, thus becoming associated with the website. However, the anonymity is not perfect because the names of websites' owners are obligatorily disclosed in most countries, even though in most cases a telephone number is sufficient.

2 Abu Nasser Skander (Skndr) was also registered as the owner of Aqsa Tube in the OHV office in France before Aqsa Tube was taken offline.

3 See our Information Bulletin: “ The Internet and terrorism: Hamas recently launched a new website called AqsaTube, an addition to its extensive Internet presence. Hamas makes intensive use of its website network to wage the battle for the hearts and minds of its various target audiences in the Palestinian Authority and worldwide” (October 12, 2008).

4 See our Information Bulletin: “ The Internet and terrorism: following the ITIC report on Hamas's AqsaTube, it was removed by its French ISP from the net. As a result, the site issued an announcement claiming it had been victimized by “Zionist-American pressure,” and stating it was currently making the necessary arrangements to return” (October 20, 2008).
Posted by GS Don Morris, Ph.D./Chana Givon at 7:51 AM

Terrorists should not be allowed to make use of internet. Their websites, mail ids should be blocked
Intenet Marketing