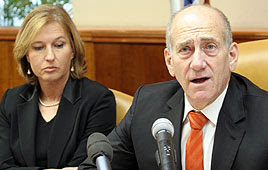 Kadima Chairman Tzipi Livni said Friday evening that Rabin killer Yigal Amir must not be allowed to express his views in the media. In an interview with Jerusalem Radio, Livni lauded Channel 2's and Channel 10's decision to refrain from airing interviews with Amir.


Livni add that Amir is a "despicable murderer who cause grave and deep damage to Israel, namely to Israeli democracy and society." Prime Minister Ehud Olmert also praised lauded the decision not to air interviews Amir, adding that "we can only regret the needless preoccupation with the killer, rather than with the man he murdered.

Earlier Friday, Olmert spoke with Second Television Authority Chairman Nurit Dabush and asked her to make every effort to prevent the interviews from being aired. The PM told Dabush the interviews "have nothing to do with journalism and freedom of speech."

"The broadcast would have hurt the feelings of the public on the eve of the Rabin memorial day," the prime minister said.

Friday morning, Amir was transferred to the Ramon Prison in southern Israel on following the unauthorized interviews he gave the media. The Ramon jail houses security prisoners.

Following the interviews, the Israel Prison Service (IPS) decided to punish Amir by withholding telephone calls, family visits and conjugal visits by his wife for three months. In addition, private belongings were removed from his cell.