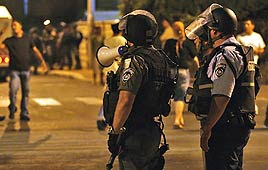 Police announced on Tuesday evening the hundreds of reinforcement troops deployed in Akko would be withdrawn after restoring order in the city that two weeks ago found itself spiraling into a nightmare of racially-charged riots. The clashes between the city's Jews and Arabs erupted on the eve of Yom Kippur after an Arab resident drove his car through a Jewish neighborhood. For nearly a fortnight police fought to quell the nightly confrontations, with rioters hurling rocks at, and setting fire to, homes and businesses.

In all 90 people - half Jewish, half Arab - were arrested for incitement or violence.

Twelve of those detained are still in custody. Police are seeking to indict six of them, and their cases are currently in the hands of the State Prosecution.

Northern District Commander Shimon Koren held a meeting on Tuesday with deputy Menachem Haver to assess the security situation in the city.

The two decided that come morning the hundreds of policemen brought in to reinforce Akko's usual police force would be withdrawn from the city, on the condition that no further rioting followed the holiday of Simchat Torah - which ended Tuesday evening.


Special Forces deployed in Akko would also be withdrawn, as would Border Guard officers and undercover agents working in the main conflict areas.


However, the police chiefs agreed, Akko's local station would receive an additional 200 policemen until further notice.


"The aim of having (more) forces stay in the city is to restore the residents' sense of personal security following the incidents," explained Koren.