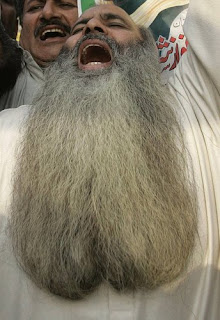 The manual, developed by France, Germany and Austria, includes signs that may indicate that a prisoner was becoming radicalized, including the presence of a growing beard. A prison group feared the manual could stigmatize Muslim inmates.

The document was distributed at a two-day closed-door conference of European security experts that ended Wednesday. It will be given to prison personnel.

Prisons "can be a facilitator and an accelerator" of radicalization and inmates are often "strongly destabilized" and therefore malleable, said Christophe Chaboud, head of France's Anti-Terrorist Coordination Unit.

"It is not a question of religion but of confrontation with the West," Chaboud said in a telephone interview.

Islam is the second-largest religion in France and, while there are no official figures available, Muslims make up a large part of the inmate population — the majority in some prisons.

A disproportionate number of Muslims can be found in prisons in other European Union countries.[...]

Experts say radicalization can range from an interest in religious books to hostility toward non-Muslims seen in a refusal to shower with them. Several top officials said new beards were one warning sign.[...]

The spokesman for the International Prison Observatory, Hugues de Suremain, voiced fears the manual could further stigmatize Muslim inmates, who lack the range of religious benefits provided to Christians.

Exactly which "benefits" are those?

France began massive arrests of Islamic militants linked to insurgents in Algeria after deadly bombings in subways and elsewhere that began in 1995 and terrorized the nation.

But it was only in 2004 that authorities began to act on the simmering threat posed by jailed extremists looking to turn even non-practicing Muslim inmates into radicals and recruit for their cause
Posted by GS Don Morris, Ph.D./Chana Givon at 7:24 AM