An inhaler at a fraction of the price 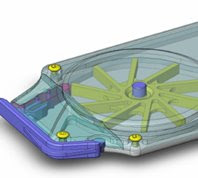 Someday soon, the box of prescription medicine you buy from the drugstore might not contain capsules or pills - instead it may take the form of tiny, credit card-sized inhalers that deliver the medication directly to your lungs. Thus envisions Ian Solomon, VP of business development at Aespironics, a company that has discovered a way to create small, cheap inhalers that deliver world-class results. Solomon explains that while today inhalers are mostly used for asthma, they can actually be ideal conveyors of other medications as well. "Pills are very common, but are not really the most effective types of drugs," Solomon tells ISRAEL21c. "They have to get through the intestinal tract and go across the body as a whole, generally to get somewhere else."

In contrast, medications delivered via inhaler travel through the lungs directly into the bloodstream. "If you give the medication by inhaler, it will go to precisely where it's needed," says Solomon.

A fraction of the price

Until now, top quality inhalers have translated to sky-high prices. Solomon's goal was to produce an inhaler with the same characteristics as the highest performing inhalers, but for only a fraction of the price.

To accomplish this goal, Solomon and Aespironics co-founders Gidi Kahane and Amir Genosar enlisted the knowledge of experts in two seemingly unrelated technologies: Professor Robert Sievers, whose field of expertise is drug particles, and Professor Dan Adler of the Technion Institute, whose specialty is wind turbines, such as those used in jet engines.

Aespironics has combined these disparate fields of expertise to produce a unique new technology in inhalers. A tiny breath-activated turbine inside the inhaler beats at a mesh packet with sieve-like holes, which contains the drug particles. This activity releases all the particles into the air at the same time, which conveys the medication directly into the lungs. Because the turbine is activated via breathing, no expensive electrical additions are necessary as they are in other inhalers of the same class.

The product is now beyond proof-of-concept and Aespironics is manufacturing working models for external testing by potential partners. This testing is due to begin by the end of the year, and if all goes well, the product could be out on the market in three years.

The efficacy of the Aespironics inhaler is such that it could replace injections - which would make life much easier for Type I diabetics, who need regular injected doses of insulin.

Currently, only top of the line dry powder inhalers deliver medication efficiently into the lungs; more commonly used inhalers leave drug particles clinging inside the oral cavity, which can lead to negative side effects. Another drawback to cheap inhalers is that because of their inefficiency at conveying the medication to the lungs, it's difficult to calculate accurate dosage.

Aespironics was founded over a year ago with investment of $600,000 from Israeli venture capital firm Maayan Ventures. The company plans to begin its next round of financing in a month.

In June, Solomon unveiled the Aespironics technology for the first time at a DPI conference in London. "The response was universally positive," Solomon recalls. "Instead of criticizing, people were helpful with suggestions." The presentation has generated interest among drug companies. As Solomon explains, "We're a package for a drug. The drug company gets the package, puts the drug inside it, and the product is theirs. It's the same as when they sell a drug via pill or injection - they can sell it as inhalable drug instead."
Posted by GS Don Morris, Ph.D./Chana Givon at 2:34 PM