Were the wars on Iraq and Afghanistan the right response to 9/11 but badly executed? If not, what should the response have been? I don’t think the war against Afghanistan could have been won even with unbridled rules of engagement or using more troops. The weeds always come back.Ted Belman

by Daniel Pipes
Cross-posted from National Review Online, The Corner

Barack Obama’s announcement today that the number of U.S. troops will be reduced to 9,800 by year’s end and to zero two years later virtually declares that this war, which will have lasted slightly over 15 years and nearly all of four presidential administrations, will end in total American failure.
That’s because the Taliban and other Islamist forces have already made a substantial comeback; because the coalition-sponsored Afghan leaders have proven themselves corrupt and inept; and because Americans and other Westerner populations remain unconvinced that this war is worth their lives and treasury. As I have often predicted, about both Afghanistan and Iraq, it’s only a matter of a few more years before the impact of thousands of lives and trillions of dollars devoted to their liberation will disappear with little more than a trace.


Republicans are quick to jump on Obama and blame him for this sorry state of affairs. But not me. The two problems they point to – an inadequate number of troops to win and an arbitrary deadline for the troops to withdraw – can both be traced back to George W. Bush. He initiated the wars in Afghanistan and Iraq, starved them of troops, and imposed a deadline for troop withdrawals from Iraq as arbitrary as Obama’s for Afghanistan. 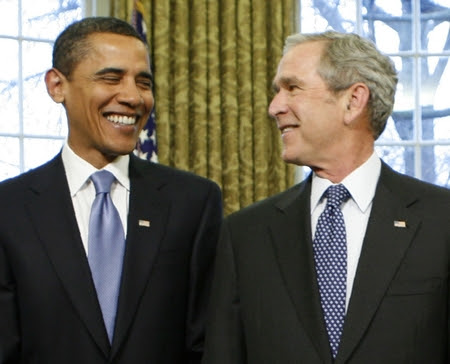 BHO & GWB: they made similar mistakes in Afghanistan & Iraq. Only when Republicans take ownership of the problem that GWB created and bequeathed to BHO can they regain credibility on foreign policy issues. (May 28, 2014)
Posted by Ted Belman
Posted by GS Don Morris, Ph.D./Chana Givon at 7:10 AM