Islamophobia or Going the Route of Rationality

My Right Word
Culture, or Climate, of Fear is a term used to indicate that an innocent culture or religion or approach-to-life is evil or at least threatening and that this term is ultimately employed to incite fear amongst the public, usually to achieve a political goal to quash or eliminate or restrict this culture. This is done by exaggerating the potential danger and more often than not, portrays the fears in an irrational manner.

Muslims face what is called Islamophobia which is presented so:


Latent and manifest Islamophobia: An inception of ideas
Has the Islamophobia industry used fear to lull our intellect to sleep and implant racist ideas about Muslims?


Over at Berkeley's Center for Race & Gender's Islamophobia Research & Documentation Project, we are informed that

The term "Islamophobia" was first introduced as a concept in a 1991 Runnymede Trust Report and defined as "unfounded hostility towards Muslims, and therefore fear or dislike of all or most Muslims." The term...incorporate[s] the following beliefs:
Islam is monolithic and cannot adapt to new realities
Islam does not share common values with other major faiths
Islam as a religion is inferior to the West.  It is archaic, barbaric, and irrational.
Islam is a religion of violence and supports terrorism.
Islam is a violent political ideology.


And the Project's working definition is so:

Islamophobia is a contrived fear or prejudice fomented by the existing Eurocentric and Orientalist global power structure.  It is directed at a perceived or real Muslim threat...Islamophobia reintroduces and reaffirms a global racial structure through which resource distribution disparities are maintained and extended.


I am nonplussed because if a threat is "real", the fear is justified, although, of course, not all measures of response can be employed.  In a new book, we learn that


"Terrorism is not the product of radicalpolitics but a symptom of political impotence." The antidote therefore seems self-evident: "A strong, active and confident Muslim community enjoying its civic rights to the full." Yet policy on both sides of the Atlantic has ended by criminalising Muslim opinion, silencing speech and increasing social division. These results may make political violence more, not less, likely.

which, of course, excuses "excesses".  All can be explained away by disingenuously minimalizing threats.

Note this, for example: 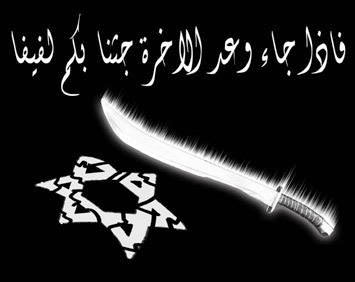 which is a graphic of those who believe that Muslims should be the new "Almoravids" (‘the body of men committed to the fight of establishing true Islam’ who preached "true Islam" and the waging of Jihad against infidels), that a revelation of the Caliphate in Jerusalem is imminent and that the army of Mohammed is coming. These are usually dismissed. Lyn Julius notes that there is a


politicization of the study of Islam and its treatment of non-Muslims. Young minds are being brainwashed by a sanitized version of history


But it gets worse.

Dr. Charles Small, who I heard two years ago at a seminar in Jerusalem, most recently pointed out


...the tactics of incitement and dehumanization are once again on the world stage without meaningful protest by the international community. Overt calls by the Iranian Regime, and other radical Islamists to annihilate the Jewish state; references to Israel as a cancer and the Jewish people as “dogs”, “bacteria”, “pigs”, “apes” have been met with collective indifference. Where is the leadership against this outrage? Once again, the world, and much of our human rights gatekeepers in academia, are silent.


It can be difficult confronting the challenge of those who seek to defend the most outrageous of ideologies by hurling charges of "Islamophobia" at one. Yossi Klein Halevi failed when he co-wrote an apology for Brandeis University's rescinding of recognition of Ayaan Hirsi Ali in publishing that the honorary degree was wrong because Ali


crossed the line from critic of Islamist extremism to demonizer of Islam itself, repeatedly labeling the faith of more than a billion believers as an enemy against whom war must be waged.

Of course, in Halevi's criticism of Israel rightist forces, there is no such phobia. Phyllis Chesler reacts to Halevi by asking

Who gets to decide who is a “renegade” and who is a “dissident”?

Ayaan HIrsi Ali is an important ally in the battle against Islamism–just as important as are religious Muslims such as Dr. M. Zuhdi Jasser. Most of all, Western concepts of freedom of speech and academic freedom should protect, not banish truth-tellers who stand for women’s rights in fundamentalist cultures. Halevi and Antepli go further and almost–but not quite–view the Jew-hatred in the Muslim world as morally equivalent to the kind of alleged insult to Islam represented by one woman. One woman. Who offers us reasoned argument and personal experience.

Yes, there are isolated extremists.  This new campaign has a goal of "frightening" and "threatening" rebuilt Zion.  But they do not remain isolated for long.  Yes, there are Islamic terrorists and yes, there is an extreme Islam and yes, Islam is extreme.

That is not Islamophobia.

There must be a counter-thrust.  Here, in a small and limited way, is an example when William Shawcross, the UK Charity Commission, stated in an interview this week:

“The problem of Islamist extremism and charities . . . is not the most widespread problem we face in terms of abuse of charities, but is potentially the most deadly. And it is, alas, growing.”
...Last month, he wrote to the prime minister requesting laws to strengthen the regulator’s powers. “It is ludicrous that people with convictions for terrorist offences are not automatically disqualified from serving as charity trustees,” he said.


We need to take back the stage of ideas, the rules of debate, the route of logic and rationality.