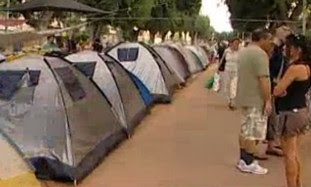 Im Tirtzu says protest organizers have refused repeated requests to negotiate with the government to resolve the crisis.

Right-wing student group Im Tirtzu announced Wednesday that it was pulling out of the main tent protest on Tel Aviv’s Rothschild Boulevard against rising housing prices because it was concerned about the organizers’ political aims.

Ronen Shoval, founder of Im Tirtzu, met with a handful of the protest organizers earlier this week, who he said have refused repeated requests from his and other organizations to negotiate with the government to resolve the crisis. “When one isn’t interested in having a conversation with the government, the problem won’t be solved. I was trying to convince them to speak to the government, but how many times can you try?” he said.

“Conversations with the Rothschild Boulevard organizers made it clear that the group is not looking for solutions; they are looking to protest.”

Roee Neuman, a spokeman for the Tel Aviv Tent Protest movement, confirmed that the protest organizers are not negotiating with the government.

But he said that this is a tactical, rather not a political, decision.

“Our job is not to present a solution – we are not experts on housing,” Neuman said. “We want the government to find solutions; we will negotiate… once the government presents us with solutions.”

Neuman would not comment on Im Tirtzu’s announcement that it is pulling out of the protest that began last week because he said the two groups are still negotiating.

He said nevertheless that all Israelis dissatisfied with rising housing prices should participate in the cause.

“We welcome everyone to join us – from the Left and Right,” he said.

Shoval, meanwhile, said Im Tirtzu is working with other organizations to draft a proposal to present to the government outlining solutions to solve the housing crisis, including instituting a tax on foreigners who own properties in Jerusalem that are not rented and improvements in public transportation to enable people to commute to the main industrial areas more easily.

But Im Tirtzu is not severing all ties to the tent protest movement.

Members of the right-wing student group will still participate in the tent protests in Beersheba and Haifa, Shoval said.
Posted by GS Don Morris, Ph.D./Chana Givon at 6:57 AM