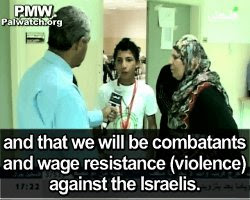 by Itamar Marcus and Barbara Crook

A Palestinian child said on official Palestinian Authority TV that a key message he took home from the Fatah movement's Sixth General Conference was for young people to see themselves as future "combatants" against Israel. This was the child's understanding of the conference's importance:
"I came here following the conference elections. I hope that there will be more conferences like the Sixth Fatah Conference [in August 2009]. These conferences are important for us because it makes us aware of leadership and that we will be combatants and wage resistance (violence) against the Israelis."
[PA TV (Fatah), July 8, 2010 and July 15, 2010]

PMW reported on Fatah's Sixth General Conference in August 2009 which was as a unique opportunity for Fatah under PA Chairman Mahmoud Abbas to join the peace process by renouncing Fatah principles and platforms that call for Israel's destruction. As PMW has documented, the Fatah leaders rejected the world's demands to recognize Israel, and continued to promote armed struggle as central to the movement's aims. The Fatah charter still calls for Israel's destruction, and can be viewed in Arabic on Fatah's website. The English version of the Fatah charter that used to appear at Fatah's website has been removed.

See PMW's website section documenting the PA's continued support for armed conflict that was a central theme of the Fatah General Conference.