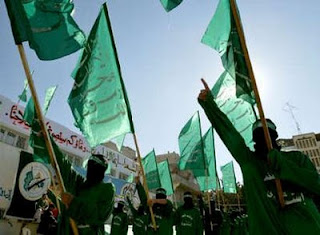 The Israeli army announced this week that on June 22 it had arrested a Hamas cell that, not long before, had ambushed a police van with rifle fire and killed one policeman while injuring two. The van, which was hit at about 7:20 a.m. on June 14, was on the way from the Israeli town of Beersheva to the West Bank town of Hebron. The policeman who was killed, Yehoshua (Shuki) Sofer, 39, was supposed to get married on September 20 and had been serving in the Hebron police subdistrict for 14 years. A couple of things about this case are notable. One is that, according to information from the IDF spokesperson presented on the Foreign Ministry’s website, some of the arrested terrorists “had been held by Israeli security forces in the past for their involvement with…Hamas….” In other words—all the captured terrorists being in their twenties—they were held for short periods presumably for offenses well short of murder or attempted murder. On the other hand, it was known that they belonged to Hamas, an organization sworn to Israel’s destruction via the mass murder of Israelis—and yet they were set free to live and roam in proximity to Israelis.

It is often said that Israel must “take risks for peace.” In this case, it took risks—not so much for peace, but to uphold presumed Western norms. If the Hamas members, when previously “held,” had, for instance, been expelled to Lebanon or even Gaza, Israel would have been pilloried—as it was in the early 1990s when the Rabin government expelled 415 Hamas terrorists to Lebanon temporarily, for two years, after a wave of murders. In that case, as described by Martin Kramer,

Israel’s action caused an international uproar. The Palestinians claimed that Israel had violated the Fourth Geneva Convention, and the images from south Lebanon, where the deportees camped out in tents in a winter landscape, boomeranged on Israel. Even the United States wouldn’t stand by Rabin. The U.N. Security Council passed a unanimous resolution which “strongly condemns the action taken by Israel, the occupying power, to deport hundreds of Palestinian civilians.” U.S. Secretary of State Lawrence S. Eagleburger said the deportation would raise “a lot of serious problems for the peace process,” which the [George H. W.] Bush administration wanted to keep “in as a good a shape as we can between now and when Clinton comes in.” Israel soon found itself capitulating—offering to take back some of the deportees, and eventually, within less than a year, all of them. By all reckonings, Israel was defeated politically; Hamas emerged strengthened.

Since then, Israel has never contemplated such measures. The world’s “conscience” is quiet; Hamas and other terrorists arrested for relatively minor offenses, yet known to be lethally dangerous, are routinely freed after short detainments; those such as Shuki Sofer and his loved ones pay the price for the “risk.”
Posted by GS Don Morris, Ph.D./Chana Givon at 6:18 PM