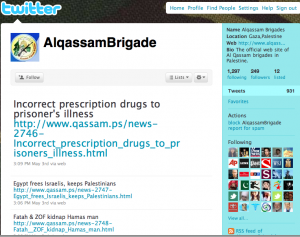 When developing this article I really couldn’t decide if I was going to write it in a satirical manner or in a concerned manner. The concept was just so ridiculous to me, I wasn’t sure how to convey it to the world. The military wing of the terrorist organization Hamas, the Al Qassam Brigades –which murders, pillages, persecutes, fires rockets, stones, lynches, blows themselves up, etc. — has a Twitter account. No folks, I am not joking. The days when the world is spooked by an unmarked video or cassette tape which arrives at the Al Jazeera offices are over. You can simply “Follow” them with your personal Twitter account.

I was stunned to see the user name @AlqassamBrigade pop up amongst the average 100 tweets an hour mentioning Gaza. I had been to the terrorists’ website (which has the fun option to choose your favorite color scheme for the menus) to see their propagandized use of images from Operation Cast Lead, and this was their matching Twitter account.

Sitting at my laptop using our Sderot Media Center Twitter account, @SderotMedia, most likely only a couple of miles away from the terrorists managing the Hamas Twitter account, I thought to engage them in dialogue on one of the base debates in this conflict:

@AlqassamBrigade As you know, you terrorize thousands just over the border from Gaza here in Sderot. Or do you call it Najd?

Essentially, this gives the terrorist organization the most popular worldwide platform to preach whatever propaganda or hate speech they like because, as you see above, “name calling is not a violation.”

The automated Twitter response continues, “If a violent threat is posted in the future, please let us know, and send the status link.” So, only if Hamas tweets about the imminent launch of a missile attack will Twitter take action?

In the worldwide blockbuster jaw-dropping movie Bruno, created by comic mastermind Sasha Baron Cohen, the main character Bruno is attempting to make peace in the Arab-Israeli conflict and while hosting a dialogue session he continually misuses the word “Hamas” for “Hummus;” it exemplifies the great light humor for which Baron Cohen is famous. The mainstream legitimization of the terrorist organization Hamas is so widespread that, these days, it is almost a household term and this is how the caricaturist can comically draw that connection on screen.

However, it is more than a joke when the entire world has turned its back on Hamas’ actions for nearly a decade thereby accepting it into the public domain. Rocket and suicide attacks on Jewish civilians are clearly not enough, but why won’t the world delegitimize Hamas for human rights abuses such as “honor killings?” Instead, the United Nations and Judge Goldstone chose to give Hamas and radical Islam around the world an over 500 page report to continue their terrorism.

Let’s be clear: This is not an issue of freedom of speech as Hamas is a terrorist organization even to the United Nations. I encourage everyone with a Twitter account to file a complaint against Hamas’ account @AlqassamBrigade to get Hamas out of our households and stop the tweeting of terror.

Jacob Shrybman is the Assistant Director of the Sderot Media Center, www.SderotMedia.org.il. He hosts elected officials from around the world and international media visiting the Sderot/Gaza region. He has been published in The Jerusalem Post, Israel National News, YNet News, and has appeared on several international television and radio stations.
Posted by GS Don Morris, Ph.D./Chana Givon at 2:16 PM