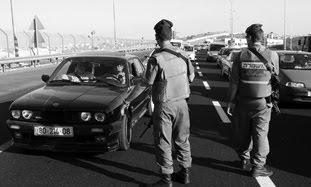 Road to be opened to Palestinian traffic.

The IDF Central Command has sped up construction work along Route 443 – between Jerusalem and Modi’in – ahead of its planned opening to Palestinian drivers later this month. Last week, the Defense Ministry began erecting a barbed wire fence along the section of the road that runs near the settlement of Givat Ze’ev. In addition, bulldozers began removing large boulders that had blocked off side roads that connected 443 to nearby Palestinian villages.

Under the IDF’s new security plan for the road, in addition to the new barbed wire fence near Givat Ze’ev, the military also plans to erect a new roadblock near the settlement of Beit Horon.

In December, the High Court of Justice ordered the IDF to open Route 443, which links Jerusalem to Modi’in, Ben-Gurion Airport and Tel Aviv, to Palestinian traffic. The road was closed in 2002 following a spate of terror attacks along it that killed six people. Until then, the road had served as many as 55,000 Palestinians living in several villages along the length of the highway, including Beit Sira, Saffa, Beit Ur a-Tahta and Khirbat al-Misbah.

The court gave the IDF five months to make preparations to open a 14-kilometer section of 443 that is located between two checkpoints – one called Maccabim, near Modi’in, and the other near Jerusalem. The road is considered “strategic” since it is one of two that link Jerusalem with the center of the country.
Posted by GS Don Morris, Ph.D./Chana Givon at 10:12 AM