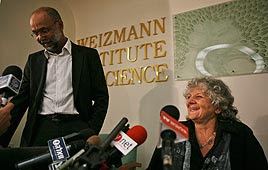 Heads of higher education system warn budget cuts in academia will make it difficult for Israelis to reach achievements like Prof. Ada Yonath's Noble Prize. 'Recent success is the fruit of past investments,' says Prof. Trajtenberg of Council for Higher Education

Prof. Ada Yonath's Nobel Prize win has raised Israeli hopes for additional honors, but heads of the higher education system warn that ongoing budget cuts are shifting the Jewish state away from similar achievements in the future. Prof. Manuel Trajtenberg, head of the Budget and Planning Committee of the Council for Higher Education, believes that the Israeli academic success in the world and the Nobel Prize win are "the fruits of past investments. Thirty years ago, the higher education system in Israel was the world's leader in scientific publications per capita, while today we are only in the fourth place. At the time there were few of us, and yet we reached amazing achievements."


International Honor
Israeli woman wins 2009 chemistry Nobel / Daniel Edelson
Ada Yonath is one of three winners of prestigious Swedish award for achievements in chemistry. 'The study was difficult to the point of impossible,' Yonath says. 'When I was told I was a leading candidate I thought it was a practical joke.' President Peres calls to congratulate her, says 'we are so proud of you'
Full story

In terms of resources, this appears to be true. From 2001 to this day, more than NIS 1 billion (about $267 million) have been cut from the higher education system's research and teaching budgets.

The cut was seen, for example, in the manpower field: Only one staff member has been admitted to academic institutions for every two that retired. Each staff member belonging to this system faces an average of 25 students, while in California – for the sake of comparison – the ratio stands at one staff member for every 20 students.

Haifa University President Prof. Aharon Ben-Zeev, chairman of the University Heads Committee, believes that Prof. Yonath's achievement stresses the need to increase the support for the scientist of the future.

"The win strengthens the utmost importance of promoting research in particular and the higher education in general, and stresses the need to increase the resources dedicated to supporting the young generation of scientists in Israel, which is of high quality," he says.

Ben-Zeev urges the Israeli government to invest more in research and to guarantee the return of resources to the higher education system, which he says "is dealing in recent years with particularly difficult budgetary challenges."

After two years with no budget cuts in terms of research, this year is expected to see a NIS 90 million ($24 million) cut in budgets slated for this purpose.

The cutbacks in higher education have also made their mark on aging faculties. In the past year, only 104 new scientists were received into all the universities, and the lives of those 104 are not expected to be easy.

A scientist requires, among other things, a technical lab staff and the cost of maintaining one is not inexpensive. A scientist just starting out does not immediately receive research grants and must find alternative funding until a grant is found, most of which come from abroad.


Prof. Yonath. Another Nobel in near future? (Photo: AP)

Scientists complain that the Israel Science Foundation does not meet their needs. The Shochat Committee for reforms in the higher education system ruled that the foundation's value should be doubled and that NIS 100 million to NIS 200 milion (between $26.7 million and $53.5 million) should be added to its coffers every year.

The new Nobel laureate actually sounds less decisive. "The young people working today in the sciences in Israel are excellent, on a very high level," says Prof. Yonath. "It is hard for me to say whether it will be easier or harder for them to achieve than it was for me."

She agrees, however, that "if they receive appropriate budgeting, they can reach their own heights."

Prof. Yonath asserts that "budgets are very difficult. The cutbacks don't help. The fact that scientists must dedicate so much time to thinking about money crushes them. It is possible and necessary to improve this very significantly."

The previous Israeli to win a Nobel Prize, Prof. Israel Aumann, sounds more optimistic as well. "I think that there will be more Nobel laureates in the coming years," the 2005 Nobel laureate in economics declared. "There is a saying in English that goes, 'There is always room at the top.'"


Aumann does not belittle the importance of budget, but also give great credence to the Jewish mind. "The problem with cutbacks is not an issue of some prize or another, but of an entire infrastructure. Budgets are important, but this is not what ultimately matters. I do not think this will be a hurdle in the future," he predicts.

Aumann backs up his claims with past examples. "As Prof. Yonath started her research, there was less budget, fewer students, and fewer universities," he said. "Also when I started researching, these things did not exist. But, where there is a will, there is a way."

Yael Levy contributed to this report
Posted by GS Don Morris, Ph.D./Chana Givon at 6:51 AM

It is my personal opinion that ‘writing the wrongs’ constitutes propaganda that is poorly checked and inaccurate. This is not a personal attack on the author(s), but a stand against the spread of information that deliberately defies accountability for human rights in Israel and the Occupied Territories, and the deliberate use of degrading and generalised material on the real problems of Palestinian statelessness.
Don’t fund ignorance. Make your own mind up, not someone else’s.