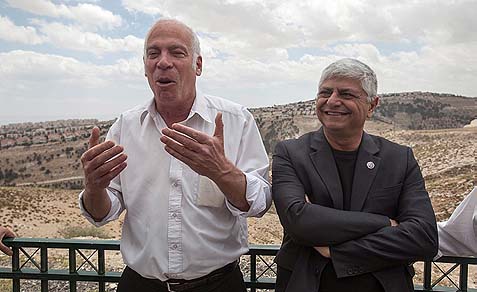 Minister of Housing and Construction Uri Ariel (L) and Mayor Benny Kasriel speaking to the press at the E1 area between Jerusalem and the Kasriel's town of Ma'aleh Adumim. A lot of talk – zero construction so far.
Photo Credit: FLASH90

Prime Minister Netanyahu is functioning as an agent of U.S. foreign policy and Palestinian expansion.
By: Yori Yanover


Since the beginning of 2013, not a single housing unit was built in East Jerusalem, Housing and Construction Minister Uri Ariel told Army Radio last week. “The figures speak for themselves,” Ariel said. “You should ask the prime minister’s office about it.”

Prime Minister Netanyahu for his part said last week that, regarding construction in east Jerusalem, Israel is better off “being smart and not being right.” And so, in line with that statement, there has been a standing order from the PM, given under heavy American pressure and in accordance with a vehement recommendation from NSC chief Ya’akov Amidror, Minister Ariel has not been given a green light to issue new construction bids in East Jerusalem.


There is a construction freeze in the settlement blocks of Judea and Samaria as well, but the freeze in Jerusalem is particularly dramatic, in light of the fact that it has been lingering through the second term of what is supposed to be a right wing government.
Moreover, the halt on Jewish construction in the E1 area, which lies between the Ma’ale Adumim cluster and the Jerusalem municipality, has created a vacuum that’s invaded by Arab settlers.
A new report which will be issued this week by the Jerusalem Center for Public Affairs is warning that continued construction freeze in E1 could eliminate the plans for a territorial contiguity between Ma’ale Adumim and Jerusalem.
The report, Understanding Israeli Interests in the E1 Area: Contiguity, Security, and Jerusalem, by former Ha’aretz reporter Nadav Shragai, explains that the opposition to building in E1 is unacceptable to Israel, since in the area between Ma’ale Adumim and Jerusalem, along the Jerusalem-Jericho road and in the E1 area, a considerable amount of illegal Palestinian construction is in progress. This illegal activity has already significantly narrowed the corridor along which the central arterial road between Jerusalem and Ma’ale Adumim runs – from two kilometers to one kilometer. The illegal construction already threatens to sever and, in the future, preclude Israeli continuity between the two cities.
Israeli avoidance of creating settlement continuity between the Jerusalem area and the Ma’ale Adumim area will inevitably give rise to another, competing, Palestinian continuity running north to south, warns the report.
It continues:


There is an almost complete Israeli consensus on the need to link Ma’ale Adumim to Jerusalem via construction in E1, and on the need to retain this territory under Israeli sovereignty within the country’s permanent borders.
Six prime ministers, from Rabin to Netanyahu, declared publicly that they would build in E1. Yet, except for the construction of the Judea-Samaria District police station, the process has not even begun because of the international community’s opposition.
Time after time, Israeli leaders proclaim their commitment to Ma’ale Adumim and the building of E1. These same leaders, however, show great deference to the position of the United States, which currently seeks to prevent construction in this area. This behavior entails a built-in contradiction: on the one hand, the message is conveyed that Israel will build in E1 because it is so vital to its interests; on the other, through nonpublic diplomatic channels, world leaders receive another message – that meanwhile Israel will bow to the international community’s opposition to this construction. This behavior makes it very difficult for those involved in Israeli public advocacy to address the world’s and the Palestinians’ objections to the E1 plan.

Sadly, when it comes to fulfilling his promises on renewing Jewish construction in east Jerusalem, Prime Minister Netanyahu is functioning not so much as a “smart rather than right” leader, but as an agent of U.S. foreign policy, as well as an agent for a Palestinian takeover of the Jewish Area C in Judea and Samaria.