Abbas says "Next year in Jerusalem" 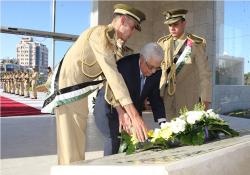 Mahmoud Abbas laid a wreath in honor of mass murderer Yasir Arafat today, on the occasion of the first day of Eid al Fitr.

He said that next year he hopes to lead a Palestinian Arab state along the so-called "1967 borders" with its capital in Jerusalem.
And the pro-PA media outlet Palestine Press Agency headlined the story as him saying "Next year in Jerusalem."
He also led Eid prayers at a nearby mosque, along with a large number of prominent PA officials and diplomats.
Abbas also sent a representative to lay another wreath at a memorial for "martyrs" (i.e., terrorists) in Jericho.
Abbas received best wishes for the holiday from Shimon Peres, Binyamin Netanyahu - and Hamas leader Ismail Haniyeh.
Posted by GS Don Morris, Ph.D./Chana Givon at 4:12 PM