[The painting shows a monster impaling children on his bayonet and eating them one by one. On the lower right, dead children are piled up to be eaten and two baby monsters are also shown eating children. The three monsters wear skull caps with a Star of David. The scene takes place in the monster's underground lair, just under cacti that are growing on the surface. A Star of David is also painted on the lock of the lair.]


Here's a slightly higher resolution image of a detail from the picture: 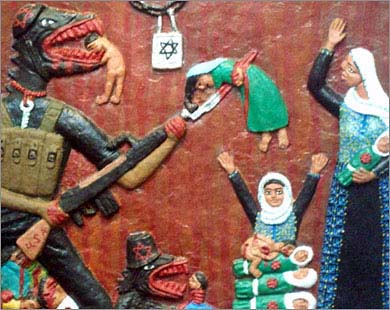 The "USA" on the bayonet is a nice touch.

Thanks Elder of Ziyon