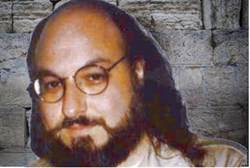 Jonathan Pollard was rushed to a hospital emergency room near his Butner, North Carolina prison.

Jonathan Pollard, convicted of spying for Israel and serving a life sentence without parole for 26 years, was rushed to a hospital emergency room near his Butner, North Carolina penitentiary early Friday after suffering from extreme pain, sources close to him said Friday.

Ashkenazi chief rabbi Yonah Metzger called upon Jews around the world to pray during the Passover holiday for the health and freedom of Pollard, whose Hebrew name is Yehonatan Ben-Malka. President Shimon Peres will meet Sunday with MKs Uri Ariel and Ronit Tirosh who will hand him a letter for US President Barack Obama asking for the release of convicted Israeli spy Jonathan Pollard.

The letter bears the signatures of 80 Israeli lawmakers. Peres's office told Arutz Sheva that Israel's president is working hand in hand with the leaders of the Freedom for Pollard Committee to maximize efforts to secure his release.

Last week, Peres bureau chief Efrat Duvdevani and other senior staffers made arrangements for the President to receive and deliver the letter to Obama.

The President's Office noted that Peres will next meet with Obama in June to formally request Pollard's release on behalf of the citizens of Israel.

Pollard, a civilian intelligence analyst for the US Navy, has been serving a life sentence since 1987 for one count of conspiracy to deliver national security information to a foreign government. He was not allowed to attend the recent funeral of his father. Pollard's wife Esther warned that his health was deteriorating.