The Necessity of Israel 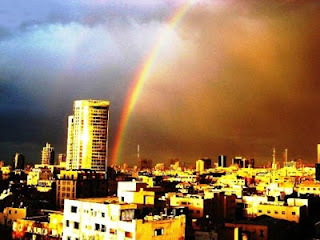 As everyone knows, Israel is the one nation on earth whose right to exist is being constantly questioned and challenged. It is the disproportionate target of the United Nations Human Rights Council which devotes the majority of its sessions to attacking the Jewish state while giving the world’s most egregious Human Rights violators a Get Out of Jail Free card. Israel is subject to a worldwide BDS campaign and to the vicious defamation of Israel Apartheid Weeks hosted on our morally debased university campuses. The ideology of the left demonizes Israel as a racist and conquistador nation that must be delegitimized, launching books, blogs, resolutions and flotillas against its very existence. Meanwhile, its Muslim neighbors have vowed to physically erase it from the map of the world, killing indiscriminately, firing rockets at its civil centers with the regularity of a metronome, and preparing for its version of the Final Solution. Why should this be so? Are we witnessing the geographic displacement of a millennial prejudice from the diaspora to the nation, with Israel as the collective incarnation of the “international Jew”? Is the current assault on Israel merely the contemporary form of the age-old pogrom? Has the West embarked on a political and economic entente with the petro-tyrannies of the Muslim Middle East, selling its soul in the process to a triumphalist Islam, as Bat Ye’or has persuasively argued in Eurabia: The Euro-Arab Axis and Islam and Dhimmitude: Where Civilizations Collide? The answer to such rhetorical questions is self-evident.

But bigotry and baseless aspersion are never openly admitted. Rather, for antisemites and anti-Zionists, Israel is regarded as a geopolitical irritant, a historical mistake, an artificial construct that should never have been established, however validly and legally. For the Quartet negotiators (the UN, The EU, the United States and Russia), and particularly for Britain, France and Germany, it is as if UN Resolution 242, guaranteeing “secure and recognized boundaries,” has no legitimate force. For Islam, Israel is an interloper in the region, despite the indisputable historical fact that Israel and Judea predate the Arab occupation of the Holy Land by more than a thousand years. For the so-called “realist” school of international relations, Israel is a political liability and therefore ultimately dispensable.

Moreover, Israel is by no means a great power. It is by normal census standards sparsely populated, and it covers about as much territory as Wales or New Jersey—as former mayor of New York Ed Koch says, one “might need a magnifying glass to see Israel” in a World Atlas since it could easily “disappear in the crease of a page.” In the larger scheme of things, presumably, its absence would scarcely be noticed.
Posted by GS Don Morris, Ph.D./Chana Givon at 3:09 PM