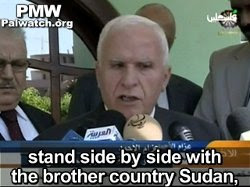 Palestinian Authority Chairman Mahmoud Abbas has expressed his personal support for the president of Sudan, Omar Hassan Al-Bashir, who is accused of being responsible for the genocide in Darfur. In a letter to the Sudanese president, Abbas wrote that he and Palestinians "have complete faith in the wisdom of President Omar Al-Bashir. In 2008, evidence was presented in the International Criminal Court of Justice that showed that "Al-Bashir committed the crimes of genocide, crimes against humanity and war crimes in Darfur." The crimes against humanity include "murder, extermination, forcible transfer, torture and rape." [http://www.icc-cpi.int accessed Dec. 8, 2010] Warrants for his arrest have been issued by the International Criminal Court.

PA TV News reports that a member of the Fatah Central Committee, Azzam Al-Ahmad, was sent by Abbas to deliver a personal letter to the Sudanese president. In it, Abbas wrote that the Palestinian people "stand side by side with the brother country Sudan." The Palestinians, wrote Abbas, "emphasize" their "complete willingness to stand with Sudan in everything it wants and in the way it wants."

The following is the excerpt from the PA TV News report on Abbas's support to the Sudanese president:

PA TV News host: "President Mahmoud Abbas's envoy delivered to member of Fatah Central Committee, Azzam Al-Ahmad, a written letter from His Excellency [Abbas] to his Sudanese counterpart [President] Omar Al-Bashir... Al-Ahmad said that President Mahmoud Abbas expressed in his letter the Palestinian people's support for the efforts of the Sudanese leadership in the face of the dangers that threaten Sudanese unity."
[TV news shows Al-Bashir reading Abbas's letter]
.
Azzam Al-Ahmad, member of Fatah Central Committee: "President Abbas's letter says that the Palestinian people and its leadership stand side by side with the brother country Sudan, and that they have complete faith in the wisdom of President Omar Al-Bashir in coping with these dangers. We emphasize our complete willingness to stand with Sudan in everything it wants and in the way it wants, in order to support the unity of the land of Sudan and its people."
[PA TV (Fatah), Nov. 28, 2010]
Posted by GS Don Morris, Ph.D./Chana Givon at 3:39 PM