What Happened to the Suicide Bombers of Jerusalem? 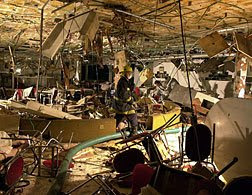 Nasty, fanatical old men, not human emotions, decided who died and when.
By Christopher Hitchens
Slate

Park Hotel bombing in Netanya, Israel in 2002. Click image to expand.The Passover suicide bombing in 2002 in Netanya, IsraelIt is sometimes important to write about the things that are not happening and the dogs that are not barking. To do so, of course, can provide an easy hostage to fortune, which is why a lot of columnists prefer not to risk it. For all I know, some leering fanatic is preparing to make me look silly even as I write. But I ask anyway: Whatever happened to the suicide bombers of Jerusalem?
Print This ArticlePRINTDiscuss in the FrayDISCUSSEmail to a FriendE-MAILGet Slate RSS FeedsRSSShare This ArticleRECOMMEND...Single PageSINGLE PAGE
Yahoo! BuzzFacebook FacebookPost to MySpace!MySpaceMixx MixxDigg DiggReddit RedditDel.icio.us del.icio.usFurl FurlMa.gnolia.com Ma.gnoliaSphere SphereStumble UponStumbleUponCLOSE

It's not that long since the combination of self-immolation and mass murder was a regular event on Israeli soil. Different people drew radically different conclusions from the campaign, which had a nerve-racking effect not just on Israeli Jews but on Israeli Arabs and Druze—who were often among the casualties—and on visiting tourists. It was widely said by liberals, including people as eminent as Tony Blair's wife, Cherie Blair, that the real cause of such a lurid and awful tactic was despair: the reaction of a people under occupation who had no other avenue of expression for their misery and frustration.

Well, surely nobody will be so callous as to say that there is less despair among Palestinians today—especially since the terrible events in the Gaza Strip and the return to power of the Israeli right wing as well as the expansion of Jewish-zealot settler activity. And yet there is no graph on which extra despair can be shown to have eventuated in more suicide. Indeed, if there is any correlation at all, it would seem to be in reverse. How can this be?

Of the various alternative explanations, one would be the success of the wall or "fence" that Israel has built or is building, approximating but not quite conforming to the "green line" of the 1967 frontier. Another would be the ruthless campaign of "targeted assassinations," whereby Israeli agents took out important leaders of Hamas and Islamic Jihad, the two organizations most committed to "martyrdom operations." A third might be the temporary truces or cease-fires to which Hamas (but not Islamic Jihad) have from time to time agreed.

But, actually, none of these would explain why the suicide campaign went into remission. Or, at least, they would not explain why it went into remission if the original cause was despair. If despair is your feeling, then nothing can stop you from blowing yourself up against the wall as a last gesture against Israeli colonial architecture. If despair dominates your psyche, then targeted assassinations of others are not going to stop you from donning the shroud and the belt and aiming yourself at paradise, even if only at a roadblock. If despair is what has invaded your mind, why on earth would you care about this or that short-term truce?
Posted by GS Don Morris, Ph.D./Chana Givon at 4:33 PM