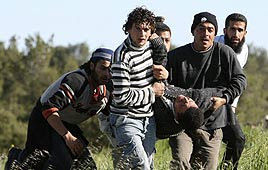 Two Palestinians sustained light-to-moderate wounds Saturday evening from IDF fire in the village of Umm Safa near Gush Etzion after clashes erupted between the Palestinian residents and settlers from the nearby community of Bat Ayin. Four settlers have been detained for questioning, including two men currently serving in the IDF. The army said that the two admitted to discharging their weapons.


Umm Safa was home to the terrorist who last month infiltrated Bat Ayin and murdered an Israeli teenager with an ax.

According to the current report, settlers approached the village at around 6:00 pm. IDF troops were alerted to the scene, and they demanded of the settlers to leave the area immediately after declaring it a closed military zone.

Several of the settlers refused to heed the soldiers' instructions, and opened fire towards the village – though their fire caused no injuries. The troops stopped the fire, and took four of the settlers into custody for questioning.

The gunfire however sparked riots within the village, and soldiers also opened fire in an attempt to disperse the rioters. At least two Palestinians have been reported wounded by the IDF fire. Eyewitnesses reported that clashes are still intermittent despite official complaints that had been lodged, and that the army and police were not doing enough to keep the settlers at bay.

In response the army said: "The IDF is working tirelessly to defend the residents of this area. It is unfortunate that irresponsible parties are creating unnecessary work for IDF soldiers, which interferes with the routine defense operations. This is grave incident and an unnecessary provocation that endangered lives."

An official with the IDF's Central Command told Ynet that following the incident "anyone who attempts to create a provocation or to behave violently would be dealt with immediately by the authorities".

"The IDF will not tolerate riots or the illegal use of arms," the official said.

The terrorist from Umm Safa is 26-year old Moussa Tit, who was arrested three weeks ago by the Shin Bet as a primary suspect in the murder of a 16-year old youth, which occurred in Bat Ayin last month.

Tit confessed to the murder and the simultaneous injuring of a 7-year old boy, and said he had committed the crime because he desired to become a martyr.