BEIRUT—Hezbollah's leader on Thursday said Syria will provide him with weapons that will change the balance of power in his battle with Israel and threatened to fight the Jewish state from inside Syria, ramping up tensions after last week's Israeli airstrikes there.
"Take notice [Israel]: If you think Syria is a passageway for weapons for the resistance, well, Syria will give weapons directly to the resistance," Sayed Hassan Nasrallah said in a televised speech during a ceremony commemorating the founding of the Iran-backed militant group's radio station.
"If you claim your aggression's goal is to prevent the resistance from boosting its capabilities, well, Syria will give the resistance qualitative weapons that it has never obtained before," he said. 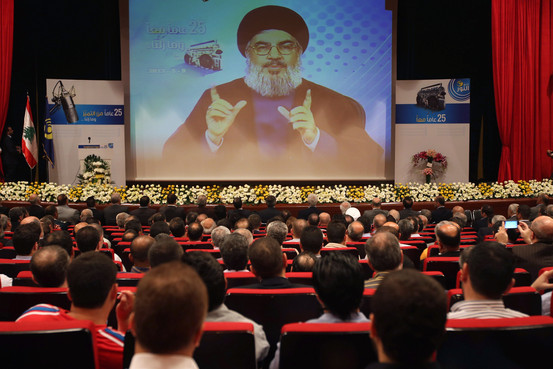 AP
Hezbollah leader Sayed Hassan Nasrallah speaks via video during a conference in Beirut, Lebanon, Thursday.
Mr. Nasrallah didn't specify what these weapons were, but said his group stood ready to receive them and use them against Israel. He also said Lebanon-based Hezbollah was prepared to assist the "popular resistance" inside Syria to "liberate" the disputed Golan Heights, where tensions have been mounting in recent months.

Israel has occupied and administered the border area, which lies about 40 miles from the Syrian capital, Damascus, since 1967 and it has been calm since the 1973 Arab-Israeli war. But tensions have built up since the start of the Syrian civil war more than two years ago.
Syrian regime troops are battling rebels in the area and mortars frequently fall on the Israeli side. United Nations peacekeepers administering a demilitarized zone between Israel and Syria have been abducted twice by rebels this year, including four being held since Tuesday.

Israel is increasingly worried that advanced weapons including chemical ones will fall in the hands of Hezbollah as well as militant Islamist groups fighting alongside the rebels amid the chaos engulfing the country.
On Sunday, Israeli jets struck what appeared to be advanced Iranian-made surface-to-surface rockets that arrived by air from Tehran and were about to be transferred to Lebanon, U.S. officials said. The U.S. has openly backed Israel's right to carry out the strikes inside Syria, which started in January. The Syrian regime said the latest strike hit three military installations around Damascus.
In Thursday's speech, Mr. Nasrallah said four to five Syrian soldiers were killed in the strikes but gave no other details.
Syrian state media trumpeted Mr. Nasrallah's speech but there was no official reaction from the regime. The speech coincided with an article published in the pro-Hezbollah Lebanese newspaper Al-Akhbar on Thursday in which it quoted President Bashar al-Assad telling unnamed visitors that he has decided to open Syria fully to Hezbollah.
"We want a strategic revenge [against Israel] by opening the door to the resistance and turning all of Syria into a resistance state," he said.
A spokesman for Israeli Prime Minister Benjamin Netanyahu declined to comment on Mr. Nasrallah's threats.
Analysts said Mr. Nasrallah's speech served two main purposes. It was first intended to justify to his main Shiite power base Hezbollah's deepening involvement in the defense of Mr. Assad's regime by framing it as a confrontation with Israel.
U.S. officials now estimate as many as 2,500 Hezbollah members are fighting alongside the Syrian regime. The group is playing a leading role in continuing battles to wrest control of the town of Qusayr across Lebanon's northeast border with Syria from rebels. While there is no precise figure for Hezbollah casualties in Syria, no week goes by in Lebanon without funerals for fighters slain there.
Dore Gold, a former adviser to Mr. Netanyahu, said he saw Mr. Nasrallah's speech as a signal that Iran planned to significantly boost its presence in Syria via Hezbollah and its own forces. "They have come up with a plan B."
"He is talking to his base; there has been some anger in Shiite communities about their members being killed," said Timor Goksel an expert on Hezbollah and former professor at the American University in Beirut.
Indeed, Mr. Nasrallah said Hezbollah and militant Palestinian groups in the region must rise up to defend Mr. Assad's regime because its demise will weaken them.
"Israel knows that the source or one of the most important sources of the strength of the resistance in Lebanon and Palestine is Syria and of course the Islamic Republic of Iran," he said. "For this reason it wants to take out Syria from the equation and corner the resistance in Palestine and Lebanon."
Other analysts saw the speech as a warning from Iran that it won't hesitate to have Hezbollah attack Israel from inside Syria if it continues its airstrikes and if the U.S., Europe and Gulf Arab states continue to back rebels in their quest to topple Mr. Assad.
"The Golan Heights is going to be an alternative," said Elias Hanna, a retired Lebanese general and military analyst.
Hezbollah was founded by Iran in the 1980s and later supported by the Syrian regime mainly as a paramilitary group in confrontation with Israel from its base in Lebanon.